Yamagakure (山隠れの里, Yamagakure no Sato; English TV "Village Hidden in the Mountains", "Hidden Mountain Village"; Literally meaning "Village Hidden by Mountains".) is a fan made hidden village located between the Land of Earth and Land of Wind. More precisely located north-west of Ishigakure in the Land of Hills. Since this country is not one of the major five, it is not governed by a Kage, but by a Feudal Lord. Inter-village matters are dealt with by the village founders, the Sugimori Clan. The village and Sugimori clan were created by DeviantART user SweetContext and the group can be found at Yama-Gakure. 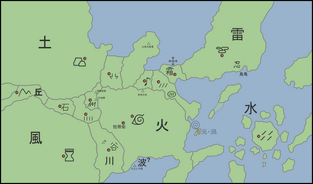 The village is built around one main river canal. Most travel being done in small boats or walking on the water to get around the town. The location of the village however, is deep within a gully in the center of many mountains. Their river runs down from the western-most mountains, through the village and merges somewhere outside of the village underground; exiting on the opposite side of the mountains.

as it appears to be apart of the landscape. Bridges stretch from buildings that are across from each other, making travel back and forth on the same stretch of canal much easier.

Just outside of the village are many farmlands and rice paddies. They provide the village and many smaller locations with anything that they can grow in the soil and large amounts of rice. The soil is fertile, but is not of the greatest quality.

An exact date on the founding of Yamagakure is unknown, however it is known to be sometime late in the Warring States Period or shortly after the end. The founding clan, the Sugimori's , conceptualized most of the village's appearance, from the canals to the structure relying on that of the surrounding trees. The name was given by collective majority, signifying the mountains around the village in all directions.

Sotaru Sugimori, would later become the first village head of Yamagakure, being considered for his popularity among the few other clans, and his talent with Mortar Release. The clans spent years developing Yamagakure into a fine village; the Sugimori's Mortar release being used as foundations for buildings, and the lining of the canals with which they travel through. This would put the Sugimori clan in a long-standing position of village heads, and in good terms with the people.

Between the events of the First and Second Shinobi World Wars, a flood struck Yamagakure, leaving most of the village devastated. This occurred due to an unusually long and heavy rainy season which rose the tides of their river and canals, saturated the ground outside of the village, and caused debris to clog in the underground exit of the river. Waters rose from a normal depth of 7 meters deep to over 8.4 meters in the shallowest locations, causing damage to homes and businesses, which were rebuilt when the flood ceased three weeks later.

This caused the economy in the village to plummet, and with the Second Shinobi World War at their doorsteps, the village was nearly defenseless while it rebuilt. Fear rose in the village, while many shinobi worked tirelessly to rebuild as quickly as possible, while defending from thieves, and rogue mercenaries.

The village now uses levees and dikes during the rainy season to keep floods from happening again, and are sure to keep the underground exit from clogging.

Yamagakure also gathered its forces and sent them to the Land of Wind, to join and support the Allied Shinobi Forces. Those stationed in Yamagakure helped to fortify its defences and protect the villagers.

The Yamagakure Hospital (山葉病院, Yama Byōin, Literally meaning: Mountain Hospital) serves the medical needs of shinobi and villagers alike. The staff is trained enough to handle most medical situations, but those with higher medical ninjutsu tend to more pressing medical emergencies. The kanji for "health" (健, ken) is printed on a sign on the front of the building.

The Summit Temple (山頂の寺, Sanchō no Tera) is a large ninja temple or shinobi monastery where many

of the villagers go to pray or seek forgiveness. It houses no singular religion and also teaches basic medical ninjutsu. It is located outside of the village, somewhere in the Land of Hills. The front is labelled with a banner stating the name of the temple.

This hidden village is home to many clans. Clans are larger than families and usually extend from a main branch and a side branch. However this is not always the case. Clans can specialize in particular hiden, nature types, kekkei genkai and other powerful jutsus. Some use their jutsu to help the village, while others are better suited for protecting it.

Yamagakure was founded and constructed by one major clan. The other outlying clans are not notable as founding clans, but as major clans that helped secure the village's prosperity.

The Sugimori Clan (杉森一族, Sugimori Ichizoku) are the original proprietors of the area of the village. After the village's construction, other important and long standing clans became shareholders of the territory. They specialize in Mortar Release, and have used such for most of Yamagakure's construction.

Major clans were around during the time of the village's founding. After order was made, each major clan became a 'shareholder' of the village.

Minor clans make up the rest of the clan population. They do not have rights to the village's land, and came much later after the founding.

Like much of the shinobi world, Yamagakure takes part in various events and festivals. One notable festival that is celebrated, is the Rinne Festival. Locals bring out stalls for food and games, and a traditional dance is held from the local temple. The end of the festival is dedicated for prayer.

The largest yearly event is in celebration of the village founder, Sotaru Sugimori, and in hope for a large harvest. This event is held in the late spring to early summer and is usually four days long.

Retrieved from "https://narutooriginals.fandom.com/wiki/Yamagakure_(LI)?oldid=93670"
Community content is available under CC-BY-SA unless otherwise noted.