We all know that the Naruto girls are lacking; it's unfortunate, but true.

Ino gets left in the dust, but she's good at what she does.

Temari is honestly pretty good, so are Konan, Tsunade, and maybe even Mei and Anko.

But while I love every Naruto girl for everything they have to offer, it's obvious that Sakura had a LOT of wasted potential; same with Hinata. Of course, Kishimoto himself has commented on his errors, and I'm sure most of us can understand why things were the way they were...

You are actually bad.

I originally loved Tenten's concept, and still do for the most part. In part one, I thought she was cute, and that the idea of a "weapon-master" was really cool. Part two comes around and her outfit sucks, she becomes more of a scroll-weapon spammer, and she never hits anything even moreso than before despite her name being Tenten cause she never misses. She moved away from being a master of using the weapons, and became more of a failure at shooting the weapons from her scroll.

Furthermore, I think that she was way too broad; I'll explain:

Tenten was a "weapon-master" and it's implied that she's essentially super good at using all weapons, however, this means that she doesn't have a real niche. Saying she's the "master of weapons" is like saying she's the "master of ninjutsu." Well what kind of ninjutsu? Elemental, Yin/Yang, medical, genjutsu, defensive, offensive, speed-type, tank-type, etc; the list goes on. With Tenten, though it might have gotten rid of her title as a master of all weapons, I think it would've been much cooler if she focused on one or two, maybe even three, but even just one alone would be fine. Focusing her down a bit would've given her more depth and a better fighting style. Think of all the cool, heavy-choero fight scenes we could've had AND, she probably could've actually won fights.

Imagine this: Tenten, the greatest kunoichi swordswoman of all time that could take on more than one seven ninja swordsmen at once. Sounds kinda far fetched right? Not when I saw this fan art someone made: 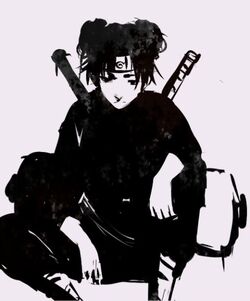 Honestly, she looks like she could mop the floor with so many characters, or at least give them a run for their money. It looks like she's got two swords strapped to her back. I think Chinese Dao swords would be cool cause they're often used in pairs. Here's an example:

She could get creative with her weapon jutsu, using techniques like "Flash" or "Dance of the Crescent Moon." I'm also surprised that despite her using the summoning jutsu all the time, she doesn't have an animal to summon, so what if she had a smaller, humanoid creature like Temari's weasel or Hiruzen's Monkey dude? Someone to help with her combat abilities. I don't know, just imagine like a praying mantis that uses two sickles or a mythological creature with more than two arms and each held a sword or whatever; you star wars fans know what I mean (General Grievous).

I just feel like they took Tenten completely down the wrong path. She was doomed from the start to feel mediocre.

What do you think?

Retrieved from "https://narutooriginals.fandom.com/wiki/User_blog:Holly_Winter19/Tenten_Sucks%3F?oldid=122543"
Community content is available under CC-BY-SA unless otherwise noted.