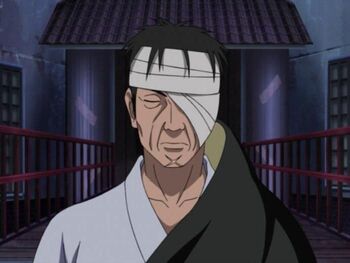 Danzo Shimura is, without a doubt, one of the most—if not the most—hated character in the Naruto series. He's an antagonist in every regard and betrays everyone who's ever worked with him. He's arrogant, totalitarian, and brutal in his methods, as well as deceptive, manipulative, and backstabbing. He's certainly not nice, and with regards to whether he's good or not, I think he falls in a more "morally-gray" area. I'm fairly certain the vast majority of Naruto fans will agree with me concerning this vague description of Danzo Shimura.

This morally-gray area I just brought up, seems to be the spark of some controversy: Was Danzo actually a good-ish man? Or at least not as bad or evil as we think he was? In this blog, I will discuss my take on the debate and point out how I think he should, or can, be perceived.

Danzo claims that his actions are in the best interest of the hidden leaf. From a certain point of view, this makes him a fundamentally good man; he's just a man trying to protect his home. However, there are two major issues:

I'll tackle intent first since this seems to be a topic of greater debate. Danzo always says that everything he does is in the best interest of the hidden leaf. He claims that he's protecting the hidden leaf, that he's doing the dirty work that needs to be done, etc. The way he protects the hidden leaf is the part that makes him controversial. We'll go into greater depth on that later in the "Danzo's Methods" section.

See, the thing with Danzo is that even though he claims he works for the best interest of the leaf, he's always doing or saying things that might seem contradictory, so much so to the point where most people just see him as a cowardly, pure-evil dude who hides behind the excuse of "doing the dark stuff so the light may be upheld". I think the problem with this idea though, is that people are forgetting the intent of his actions. Sure, we all know what he ends up actually doing; we know the outcomes and the results; but we forget his intentions for every horrible thing he's ever done.

With regards to his methods, or his actions, Danzo does some horrible stuff. He uses people like pawns and if he perceives them to be a threat to the leaf, then he gets rid of them. If they are only a threat to him, he still sees them as a threat to the leaf, because Danzo sees himself as the protector of the leaf. That's why he ties loose ends; if he dies, then the leaf will be unprotected. That's why he is "cowardly" and protects himself, even if the village is under attack. If the village falls, then he is the only one he trusts to revitalize it.

People think Danzo just chases after the seat of the Hokage, but I think he's not just after the honor and glory. Of course he wanted the power and the recognition (just like many of the Naruto-like characters), but he wanted the power to protect the leaf using methods that the Third Hokage disapproved of and was willing to eliminate the third hokage if it meant protecting the leaf.

You're playing hide and seek and you found a spot to hide. Then, that one annoying person decides to follow you around and hide with you. You already know that's not going to work, so you tell them to go away and either wait until they find a new spot or you yourself relocate. But what if they continue to follow you? You're screwed; it's over. You think to yourself, "I'd be fine, if this person wasn't here right now. If only they'd disappear. Now of course you're not going to kill the person, because this is hide and seek; it's a game with friends. What if everything you love is on the line? Your home? Your people? Your brothers and sisters? Your family? Everything you've ever cared about could be destroyed and it's all because of that one person in the way.

Danzo perceives the third hokage, Hiruzen Sarutobi, as this one person in the way. They disagree concerning their methods and Danzo thinks that Hiruzen's way of doing things will be the end of the leaf. I personally love Hiruzen, but keep in mind that a lot of Naruto Fans don't and there are arguable, but very valid reasons for why they don't.

If you were in Danzo's shoes, would you feel the same way?

Moving on, Danzo's ROOT ANBU are not as bad as you'd think. Yes, I know. They're emotionless and amoral and the list goes on, we all know that. But when you think about it, they are exactly what the shinobi were supposed to be. They're sneaky, stealthy, treacherous, did spy work, backstabbed, didn't scream out "Rasengan!" from a bush. Danzo admits that they resided in the dark as the "roots" of the Konoha tree. They did the dirty work. In all honesty, they were the closest thing to real ninja in the series in my opinion. Realistically speaking, being a ninja isn't about making friends, or finding love, or unifying countries. It's about deception, sabotage, espionage, assassination. That's why we perceive the normal ANBU black ops to be so cool. They do the black operations. The ROOT do darker than black.

But what is the intent of all the ANBU divisions? It's to protect the leaf village. In ROOT's case, it's to serve Danzo, however, to serve Danzo is to serve the leaf, because Danzo trusts only himself to be the protector of the leaf and considers himself the protector of the leaf. Therefore, by serving Danzo, ROOT serves the better interests of the hidden leaf, just like the normal ANBU serve the Hokage and they also serve what they perceive to be the better interests of the leaf village.

A popular criticism of Danzo, he orchestrated the destruction of the Uchiha because they were staging a coup d'état. If he did not do such a thing, what would've happened? We look back in hindsight as it being so horrible, but if you were in his shoes, would you risk it? Though there was plenty of manipulation, even Hiruzen was stumped. And I ask again: Would you risk it? If Itachi kills the Uchiha, the village is safe and secure, but if the Uchiha are give time for negotiations, what would happen to the village and the civilians, not to mention the repercussions of a weakened village on the rest of the Land of Fire. If you didn't have time or certainty, would you risk it?

Moving on, the creation of Pain and the Akatsuki. Pain was created after Hanzo forced Nagato to kill Yahiko. Hanzo betrayed Yahiko and the original Akatsuki because of Danzo's manipulations. People blame Danzo for the creation of Pain and the villainous Akatsuki, and I'll be honest, he is to blame for the result. However, he never intended for anything other than the protection of the leaf village. He wanted to "disrupt a peace treaty between Konohagakure and Iwagakure in his pursuit to strengthen Konoha." While we as the audience may see a peace treaty as a good thing (and I believe it was), Danzo had no idea at the time how things would work out. Keep in mind all the peace treaty betrayals in Naruto. Additionally, he wanted the leaf village to be at the top; to be number one. If the village was stronger than the rest, then it was more likely to survive and prevail in the event of conflict.

Think of this. We would strengthen our own family or boost our own child before another family or another parent's child. Not because we hate the other group or person, but because we love what is precious to us. In this regard Danzo is relatable. How could he have foreseen the creation of the Bijuu-hunting Akatsuki and Pain? Our criticisms are only based on hindsight, because we already knew what was going to happen.

I could go on about everything he ever does, but I think if you pay attention to his motives, he starts to seems like just a dude who is ruthless and will stop at nothing to do what he believes is right. That makes you just as much a villain in his eyes, as he is in yours. You both want to protect what you love, but your methods conflict and neither can succeed so long as the other survives. When did we succeed as the audience?

I'm sure that if Danzo had won and gotten what he wanted, under normal circumstances, things would've worked out okay. Yes there would be fear, and hatred, but he would've protected the leaf in a realistic way without plot armor or idealistic writing.

"With his last breath, he proclaimed that for the sake of the world and the safety of Konoha, he would take Sasuke and Tobi with him to the grave. He then activated the Reverse Four Symbols Sealing, but Sasuke and Tobi were able to get out of range. Danzō was, nevertheless, able to destroy Shisui's Sharingan in order to prevent Tobi from obtaining it."

In the dub version Danzo explicitly states to Tobi and Sasuke, "For the shinobi world and the leaf, I cannot let you two continue to live." At this point in time, he realizes that everything is bigger than just the leaf. He is trying to protect everyone: his people, the innocents, the strangers he'll never meet or get to know, and even his former enemies.

Looking at his face you can see his resolve; he's trying to do the right thing, or at least, what he perceives is right. Considering he "feared" death (for the sake of the village) and was often seen as a coward, the action of him giving up his life and cowardice for the greater good goes to show that he wasn't as bad a man as people thought he was. I'm not saying he didn't have his flaws—he had many—but I think looking deeper into his character we find that he's much more relatable and "human" than many of the other characters and he's not exactly what people make him out to be.

Sure, I don't think Danzo would make for a great Hokage or a charitable leader and I don't think he's really a Harry Potter, Severus Snape "good guy all along" kind of character. However, I do think that he really was supposed to embody the "darkness to preserve the light." Consider this, in a yin-yang symbol, he's obviously the yin half, the black region. However, within the black region, there is still white. I think for Danzo this is symbolic of who he was at his core and representative of what he was trying to achieve: The light. I also think his writing might not have been the best and it possibly drifted away from what it originally was supposed to be, but that's just personal speculation.

If you go back and pay attention to everything about Danzo's final moments, you'll realize something very important. He's did something that most people would never have the strength, resolve, or courage to do:

He died for what he believed in.

He died to protect what he loved.

Retrieved from "https://narutooriginals.fandom.com/wiki/User_blog:Holly_Winter19/Danzo_Shimura_is_a_tragic_hero?oldid=124368"
Community content is available under CC-BY-SA unless otherwise noted.