(DELETE THIS TEXT: This is where the table of contents will appear on the page)

Here you should write about your OC's academic expirience, before-plot childhood, family, how did she become what she is today (e.g. if she's an ANBU why and when did it happen, the reasons for being chosen etc.

This is where you will write about your OC's personal traits, such as attitude towards other characters, way of thinking, likings and personal opinions

Here will be your OC's appearance. Describe the history of any marks they might have (you can do this in the background of course), their hairstyles, clothing, weapons and other physical traits

Here you will write the basics of the ablities, such as what is their strongest asset, their strenghts and weaknesses, strategical preferences and such

Bloodline limit. Delete if unrelated. Your oc does NOT need to have one. If related, here you should describe the ability to use the limit, its affects on the character and when do they choose to use it. It is suggested that if you are planning to have more than one character using the bloodline, you create a seperate article for the Kekkei Genkai. If your character is a user of a KG that is already in the Naruto Universe, please add a link to a Narutopedia or Wikipedia article about the bloodline limit.

Fill out one of the following tables. Delete the ones you will not be using. The ratings are out of 5, 5 being the highest. For total, add up all the points for each category. (Note: The Databook Numbers are NOT parts of the anime. Think of the First and Second Databooks to be in Part l. The Third is the most recent of your oc, and the only one of Part ll.)

Part I and II template: Use for characters who appear in both Naruto and Shippuden. 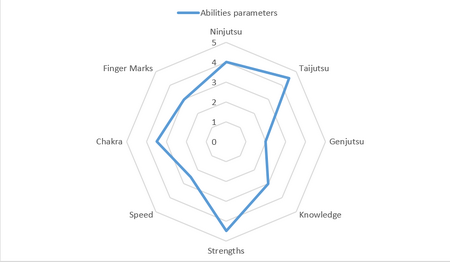 Here you write about your character's plot during the original Naruto series. Delete the heading if your character appears only in Shippuden.

Here you write about your character's plot during the Shippuden series. Delete the heading if your character appears only in the original Naruto series.

Here you should bulletpoint things such as favourite foods, basic hobbies and name meanings. To make a bullet point:

simply press the little *----- icon next to the S sign under Text appearance.

Community content is available under CC-BY-SA unless otherwise noted.