Mina (ミナ, Mina) is a girl with no known family and has a mysterious past. She is currently living in Konohagakure with her husband Kakashi Hatake, with whom she has a son, Ken Hatake.

She is not Konoha's people, her village is so far from Konohagakure. Her family is not a ninja, but it is an amazing inventor in the ninja world.

When Mina was a young child, her family became targeted by bandits on account of her clan's vast wealth. On the night of the attack, the thieves slaughtered everyone in the home. It was only because of the quick thinking of the maid that Mina survived. Before they could be found by the bandits, the maid takes her to the secret room it connects to the outside of the village, to let her escape.

With all that she has found causing her to shock and lose some memory. She felt a strong sense of hatred toward humanity, even if she had no idea why. Mina later escaped the ruins of what was once her home, and made sure not to approach anyone since then.

She has a bracelet with it, her bracelets have some built-in mechanism, when it switches open, it will connect to the user's body, it's conductor of electricity will release electricity for body armor. When a creature approaches her closely, it will be shocked by electricity. She uses this to protect herself.

After she revived and lost her memory, she traveled alone with baggage with a letter from her home that's only in a few pieces, which read says "Mina-Sama, go from here and do not come back." (Which is derived from her maid) and lots of Valuables, making her stay without being dependent on anyone. She tried not to meet strangers and always avoided them.

When she was 6 years old, She met a girl named Hikari, Hikari is a very good girl, and teach her about peoples, she therefore tried to understand more about peoples. Until Hikari was bullied by bad ninjas, that makes her feel more hateful to peoples. While she tried to help Hikari, there was a boy who appeared to help her. He is a ninja boy, with silver hair wearing a mask, she immediately fell in love with him.

Later on, she went looking for him in an attempt to get close to him. When she came to Konoha, she met boys training their Ninjutsu. She decided she wanted to be a ninja like them so she tried to follow them, but no matter what way, she couldn't use the Chakra at all.

She hangs around Konoha to be able to meet the silver-haired boy again, along with trying to train to be a Ninja indefinitely. But, there were only boys in the village noticing her but not for any good reasons. They bullied her, for the fact she is homeless with no friends or acquaintances, so she got into a heated quarrel with them. And the silver-haired boy came to help her, his name is Kakashi Hatake.Then she followed him to confess love to him but Kakashi is very shocked. He denied her thinking that she is a boy which later makes her change. Two years later, after Kakashi loses Obito and Rin, he became a young boy without vitality, and she's tried to do everything to make him better. Outside, Kakashi looks fine, but she knows deep inside he's still in pain.

She begged to live with him because she wants to take care of him closely. Finally, Kakashi would allow her to live with him. Although Kakashi knows that she loves him so much, he never responded to her feelings. But he felt comfortable with her

He often tells people that she is like his sister, but Mina doesn't care what Kakashi thinks. She just wants to take care of him closely. And often, he gets headaches with her stubbornness.

She has long straight blue hair with a side ponytail, red eyes, white smooth skin, breasts and big hips. She is a Pretty girl, with a slender build and perfect personality.

Her appearance Not friendly, she rarely smiles, looks like an arrogant person, So no one dares to approach her too much. And She rarely likes to tell her own story, but she like to investigate other people's stories.

Her character (Only Kakashi knows) She's like a kid: fun-loving, playful, curiosity for everything, and is not very serious about anything. She has a low tolerance and does not like anything complicated. She also always does things something straightforward and she doesn't like having rules for herself.

She does not like to be featured and tried not to bind with anyone. She hates humans so do not relate to anyone, but deep down she is very gentle.

She can't use Chakra, her ability to fight is negative and everything sucks for her, but she never gave up and kept trying to practice it until she became good at using ninja weapons. (from Manga ch. 6)

She is intelligent, although she does not like to do anything complicated. Everything she decides to do is always simple. She is good at inventing some things.

She has lived with Kakashi since childhood. (Kakashi needed to get her because he didn't want a girl to live outside alone. She also does not want to be with anyone other than Kakashi) She lives in Konoha quietly, not concerned with others except Kakashi. Almost none of the people in the village knows her, but she knows the story inside of Konoha. (from Manga ch. 3)

She found the little jinchūriki of the Nine-Tails by accident, and she was also aware of the attitude of the people in the village who acted against him. She felt terrible, the kid was obliged abounding for the village, but not treated as they should be.This causes her to remain her hate for human selfishness.

One day she saw a kid being pushed down and being treated with violent abuses. She could not bear and the transverse people in the village said "This kid is considered the nemesis of the village." she was very angry and replied in a low voice "I never saw kid who's considered a nemesis, I've seen adults selfish try to push everything out of the way, to make themselves comfortable" She took the child out of there and sat, feeling guilt for interfering with other people. And that kid is Naruto Uzumaki. Naruto was very happy to have someone protect him. (from Manga ch. 8)

When Kakashi was assigned as the leader of Team 7, comprised of Naruto Uzumaki, Sasuke Uchiha, and Sakura Haruno, It's made known that Mina lives with Kakashi and they are very close.

Mina have a habit like a child, but she has a good understanding of others, so it's good for them.

She married Kakashi silently, because she doesn't like being center of attention, and they have a son. They named there son named Ken, and Ken is their only child. Ken is a genius ninja like his father, but he's playful and not serious about anything, like his mother.

She is a housewife who cares for her family, and has a normal life with Kakashi like the past.

Road to Ninja: Naruto the Movie

In the Genjutsu World is an alternate world created by Tobi. In the parallel world, Mina in this world is very different from the normal world, She will be a sexy girl with a ponytail. And the boys like her a lot. Kakashi who is quite similar to Might Guy. Kakashi and Mina are lovers, And Kakashi must always chase the men who always mess with her. 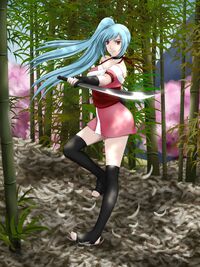 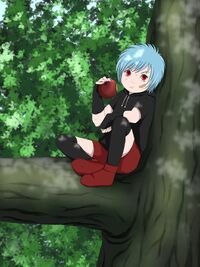 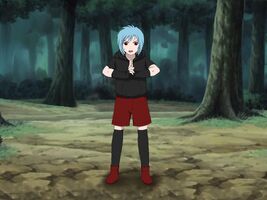 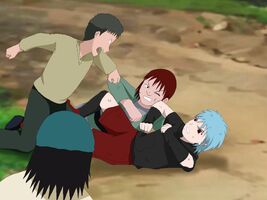 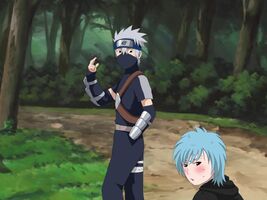 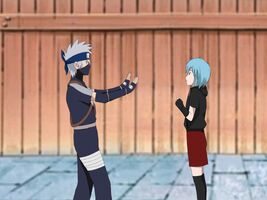 He thinks she is a boy and confess love to him. 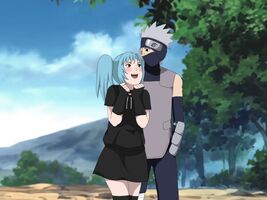 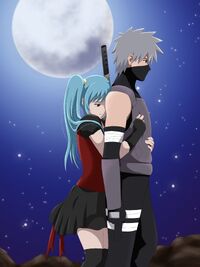 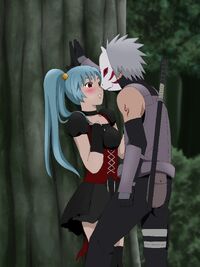 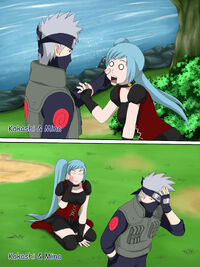 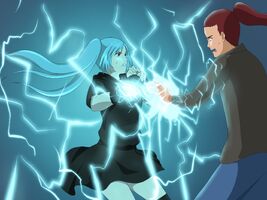 The secret of her bracelet 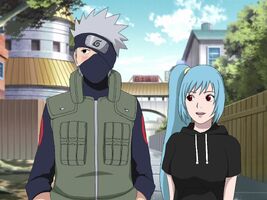 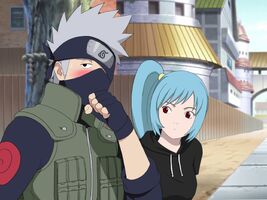 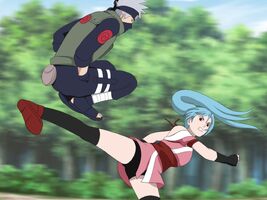 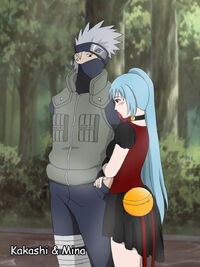 she care everything about him 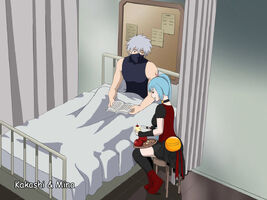 When Mina take care of Kakashi in the hospital 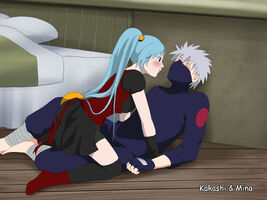 When he tease her and they are fall down 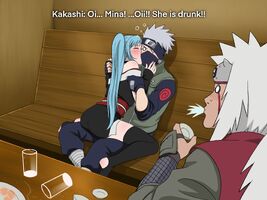 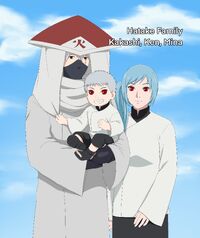 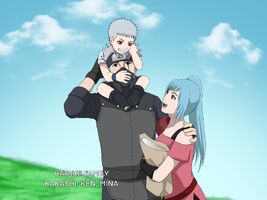 on The last - Kakashi Ken Mina 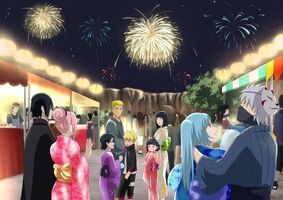 on Boruto Next generation

Read all Manga full Kakashi with Mina Story on this link.

Retrieved from "https://narutooriginals.fandom.com/wiki/Mina?oldid=140490"
Community content is available under CC-BY-SA unless otherwise noted.