As one of the three founding clans, the Ichigatani clan has been serving and protectiong Mangetsugakure since the days of civil war.

However, the Ichigatani clan is rather peaceful and has no interest in political matters so it is rare that any of its members seek to earn the rank of Alpha.

While the Ichigatani people have various traits and different body types, they all usually wear red make up under their eyes, which represents the second pair of eyes of the Marumushi. It seems that it is also common in the members of this clan wearing the ninja headband in the waist.

The only trait that is common to all the members of this clan is a triangular mark somewhere, about the size of a mole. This is the entrance and exit gate of Marumushi to their bodies.

Ichigatani abilities rely most on cooperation jutsus along with their Marumushis colony. For obvious reasons Marumushi techniques are are taught only within the clan. 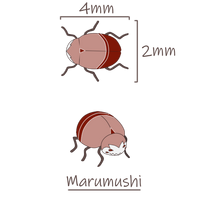 There are no visible differences between males and females: both have two pair of red eyes, pink body and white face. On the end of its carapace, the pinkish color turns red and is delimited by two white stripes. Between the neck and body, the Marumushi has a red triangle.

When feeding actively the shape of the Marumushis changes. Instead of growing proportionally by simulating a larger version of the insect, Marumushi changes its shape by getting rid of the vertices of its figure and adopting a completely circular shape. By doing this the Marumushi hides his legs and head in order to protect them while feeding.

Marumushis are very temperamental and have a strong sense of community which will make them defend their kind and their host if they are under attack.

At birth the members of this clan become a host of a Marumushi colony which nest inside their bodies and feeds passively of their chakra. In exchange, the colony will assist their host feeding actively of any target their host choose. When a Marumushi feeds actively, it quickly grows in size and it becomes very heavy making imposible for its prey move in matter of seconds. This means its prey does not only gets his chakra drained but also can not escape easily.

All right belong to Misfits77

Retrieved from "https://narutooriginals.fandom.com/wiki/Ichigatani_Clan?oldid=122496"
Community content is available under CC-BY-SA unless otherwise noted.