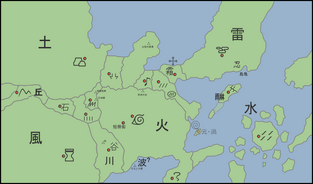 Edagakure (枝隠れの里, Edagakure no Sato; English TV "Village Hidden in the Branches", "Hidden Branch Village"; Literally meaning "Village Hidden by Branches") is the hidden village of the Land of Rainforests. Because this village is not one of the Five Great Shinobi Countries, it is not governed by a Kage, instead governed by a village head, with the most recent being Kegawa.

The village is located in the center of the Land of Rainforests and is protected by the various dangerous fauna and flora that the country is infamous for. The village itself is built near the tops of the giant trees that the Land of Rainforests is famous for, with the various buildings being connected by bridges or lifts. The buildings in the village are build on various levels of the trees, with lookout posts near the bottom, residential and market buildings being near the middle, and finally the governmental buildings such as he Village Head's office, the hospital and Academy are near the top. In the canopy of these trees are several large rain catchers, so that nobody has to travel to the ground to fetch water and face the dangerous creatures.

Like many hidden villages, Edagakure was founded shortly after the end of the Warring States Period by Otakebi who defeated and gathered all of the Island's shinobi tribes under his rule. After subjugating the island's country's shinobi, Otakebi and his followers settled near the center of the island and built Edagakure high in the trees. Otakebi however faced many assassination attempts, though all of them failed and in response, proclaimed that anyone who could defeat him in single combat would be leader of Edagakure, setting up the tradition that continues to the modern day of defeating the current leader of the village in order to become to next.

Just before the start of the First Shinobi World War, Otakebi died and after much debate and fighting, a shinobi known as Kansoku was selected to become the second village head. A few months after he became village head, the Hakuyō tribe attempted a coup d'état to take over Eda, but failed thanks to a spy placed in their ranks by Kansoku. After suppressing the coup attempt, Kansoku ordered the death of every member of the Hakuyō tribe. While most of the tribe was killed, some escaped to the Land of Ice and Land of Fire, which he ordered several Eda shinobi to pursue and eliminate. Kansoku then had the bodies of the Hakuyō tribe decapitated, their heads placed on spikes throughout the village and their corpses thrown into the jungle to be eaten by wild beasts.

Because of the loss of a powerful portion of Eda's military, Sankoku focused on improving the infrastructure and defenses of the village instead of invading other countries like the Rainforest Daimyō at the time wished.

Like many other villages at the time, Eda was used by their host country in order to expand their territory, with the Land of Rainforests goal to control the shipping waters of the eastern coast. Early in the war, Edagakure shinobi invaded the Land of Hot Water, decimating its shinobi from Yugakure, and annexing a large amount of its coastal territory. Some time later, with extra resources from the Land of Hot Water, Edagakure invaded and destroyed Uzushiogakure and the Land of Whirlpools, fearing their fūinjutsu prowess. Later, Eda would invade the Land of Frost, and while fighting shinobi of Shimogakure, they were attacked by Kumogakure shinobi. This resulted in the near complete destruction of Eda's mainland shinobi and the death of Funerensa, the fourth village head. This ultimately forced Eda to relinquish the territory that they had gained and return their remaining forces back to the Land of Rainforests for the remainder of the war.

During the Third Shinobi World War, Eda played less of a role than it did during the Second Shinobi World War. Feeling confident that their forces had regained their strength, Eda attempted to attack the Land of Water, only to be repelled multiple times by Kirigakure shinobi. Seeing that there was no way to win and fearing an attack from Kumogakure, Eda made peace with Kiri and fortified their own defenses against an attack from Kumo that never came. The unnamed seventh village head was in charge of Eda during this time.

While Eda did not directly fight in the Fourth Shinobi World War, it did loan a unit of 100 of its own shinobi to assist in the fighting. The main purpose of the 100 shinobi was to gain as much information on the Allied Shinobi Forces as possible; information such as tactics, techniques, numbers and overall fighting strength.

Unlike most of the other countries of the shinobi world, Edagakure has tribes instead clans, with each major tribe having several smaller ones under their control.

The Hakuyō Tribe (白葉部族, Hakuyō Buzoku) was one of the major tribes of Edagakure around the time of the First Shinobi World War. Unlike the other tribes, they were the only ones to possess a kekkei genkai, which allowed them to partially or fully transform into a dragon-like entity. During the First Shinobi World War, the tribe revolted and attempted to overthrow the Eda leadership. The revolt ended in failure because of a spy in their ranks, with the end result of the uprising being the majority of the tribe being killed and the rest fleeing the country.

The Kajū Tribe (果汁部族, Kajū Buzoku) is one of the major tribes of Edagakure and specialized in personal barrier ninjutsu before it became public knowledge in the village. After the village's construction, many members of the tribe became front line fighters, contributing to many of Eda's victories due to their barrier ninjutsu protecting them.

The Kuroha Tribe (黒葉部族, Kuroha Buzoku) is one of the major tribes of Edagakure and specialized in bamboo techniques before it became public knowledge in the village. After the village's construction, members of the tribe became instrumental in the defense of Edagakure, being able to manipulate the bamboo that was common in the Land of Rainforests to repel invaders.

The Ochiba Tribe (落ち葉部族, Ochiba Buzoku) is one of the major tribes of Edagakure and specialized in poison taijutsu techniques before it became public knowledge in the village. After the village's construction, many members of the tribe became assassins who were renowned in being able to poison and kill their targets just by touching them.

Much like Konohagakure, Eda celebrates the Rinne Festival and celebrates it with the exchanging of gifts. Also during the festival the village head will randomly select an academy student to personally train for one year.

Eda's most important holiday is known as the Golden Star Festival. It is celebrated when a special tree in the village blooms its golden-colored fruit. Following the gathering of the fruit, they are randomly distributed to the people of the village, followed by a celebration that lasts three days.

Retrieved from "https://narutooriginals.fandom.com/wiki/Edagakure?oldid=91172"
Community content is available under CC-BY-SA unless otherwise noted.