As a child, Anri began training her clan techniques. She was taken to a cave outside of the village to collect a chunk of unique crystal that their clan uses. Each day she would flow some chakra into the crystal until it eventually took on a geometric shape. She was then able to properly use her clan techniques. Near the end of Part II, Anri became a chūnin.

Anri is a fairly shy girl. She gets embarrassed easily, and will usually avoid situations that may result in this. She enjoys reading all kinds of things and exploring places like libraries, with the aid of her sharp memory. This has gotten her into trouble on occasion when she finds various documents in the village offices. On one of these occasions, she met Kazō. She has shown to have a bit of a crush on him, and will usually turn red when he asks her to do something for him. During Part III, she has gotten better at composing herself when around him and even scolds him for being so easy-going with his job. However, she is very loyal to Kazō, and trusts his judgment on diplomatic decisions. With her new position, she has gained more confidence around others and takes her role very seriously.

Anri is a fair skinned girl with brown hair and grey eyes. She wears square glasses. Anri wears the standard attire of Kusa's archivist-nin, consisting of a black shirt with matching pants and a black flak jacket with no neck guard. It is fastened by metal clasps on the sides. A grey pouch is wrapped around her stomach to hold her crystal prism and a few ninja tools. Like most archivist-nin, she does not wear her headband. Part of the reason is it helps show her neutral position when recording events from the sidelines. The other reason is so she can easily wear her sense blocking helmet. As Kazō's assistant, she carries a bag over her shoulder to hold various files and paperwork.

Two years after the Forth Shinobi World War, around the time of events in The Last: Naruto the Movie, Anri has changed little. When with Kazō on diplomatic missions, she wears a tan, sleeved cloak over her normal attire. Her flak jacket is now similar in style to the new version used in Konohagakure during this time.

The Toueizu clan's Memory Recording Technique allows the user to chronicle anything they see or hear. Once activated, the user’s normal brain functions stop. A special section of the brain is then turned on, allowing any observation to be imprinted in their heads. This area of the brain is an area that cannot normally be accessed, so the user is not aware of the information after ending the technique. This ensures that the information cannot be viewed by others if captured. The only way the information can be retrieved is by using the Memory Projection Technique.

Using special crystal prisms, the Toueizu clan can project information recorded with their Memory Recording Technique onto a flat surface. Like actual recording devices, they can pause and rewind the projected events. To aid in accessing this hidden information, special helmets are worn that block the user’s sight, hearing and smell.

Along with her memory techniques, Anri also was born with an eidetic memory. This lets her remember things with high precision. She cannot rely on this skill for archiving, however, as she wouldn't be able to project the memories. Instead, it has come in handy when remembering files and other data that she sees on a daily basis when working with Kazō. This is why he chose her to be his assistant, though it is mostly so he doesn't have to remember things himself. 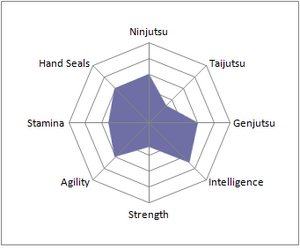 Anri is first seen looking around an office. She was technically not supposed to be there, but had wandered around after reporting on a mission. She scanned over various books and other items lining the shelves, before hearing someone come in. She began frantically apologizing for her actions, but the visitor, Kazō Yakusho, ignored her and asked if she had seen certain paperwork laying around. She recognized his description imediately, and said she saw some papers like that on one of the shelves, wedged between two books. He grabbed the papers and ran out, saying how much of a help she was. Before she could do anything else, he reappeared and told her she should probably leave before someone else saw her. She stammered out a reply and did as he instructed.

(During first encounter with Kazō) "Oh... um... I think I saw a paper like that over there on the bookshelf... Between the blue and green books near the end..."

Retrieved from "https://narutooriginals.fandom.com/wiki/Anri_Toueizu?oldid=75841"
Community content is available under CC-BY-SA unless otherwise noted.