Amaru Akiyama (秋山天流, Akiyama Amaru, née Mizushima (水島)) is a kunoichi of Konohagakure. She's known well for her seemingly angelic appearance and personality, as well as her brutish strength. Amaru is a member of the Mizushima clan, a group of blacksmith shinobi. She's an original character created by ~Love-Inspired of DeviantART. (Now on the account SweetContext☆).

Amaru entered the academy with a shy disposition but quickly drew others to her with her soft and approachable personality. She was popular with the boys in her class of the time, but in this case one would find it very difficult to approach her. Amaru from a young age was very preoccupied and enamored with her clan's work as blacksmiths. It was her goal to become a fine blacksmith for her Akiyama counterpart someday. As such, Amaru was always excited about Ōkami's lineage; hoping that he would one day receive her weapons. She would never admit out loud her feelings for him, but it was apparent to her family when she became incredibly jealous of her brother Yūsuke, who had become his blacksmith instead. However since Ōkami was now apart of the compound, she buried her feelings so he wouldn't notice her odd behavior.

Later on, Amaru was put in a genin team alongside Ōkami and excelled quickly to status of chūnin. Although near each other for many years, the two spent most of their teens unaware of the other's mutual affection.

Being a young child at the time of the war, she was kept away from harm. Many of her relatives fought and died during this war, which greatly upset her. Namely, her aunt had lost her life and this was a big hit to Amaru's mental stability, as she had been like a second mother to her.

Being a newly appointed genin, Amaru was terrified. She along with the other Mizushima children were gathered in an underground sector of the compound with only two other adults. The others were out aiding the village against Kurama's attacks. Since this was only slightly after the Third Shinobi World War, and more lives were lost, Amaru held strong contempt towards Naruto in Part I.

As a member of the Mizushima clan, Amaru had to pass her coming of age ceremony to continue being a blacksmith in the clan. The age that the ceremony is conducted is thirteen, and are accompanied by a jōnin ranked smith to help in the forging of the weapon of their design.

Amaru chose the design of a small dagger, and spent the weeks leading up to her ceremony diligently planning, sketching and making prototypes. When the day of the ceremony arrived, she was joined by three other clansmen who were also crafting their weapon. This ceremony would last most of the day. Amaru from then on was certified to continue her work as a blacksmith. She keeps this weapon on a small pedestal to remind her of her hard work.

To most, Amaru has a very soft personality. She's polite, friendly and very soft-spoken. As a child she was very shy and from her perspective, found it difficult to make friends despite easily drawing others to her. After some gentle encouragement from her brother, she began to open up from her shell and make friends.

However, while being known for her kind and gentle demeanor, at home she was notorious for tantrums (of which she was aware of) that came with unparalleled strength; strength which only became greater from smithing. Because of this, she tried to hide the quick-to-anger side of her as she thought her friends wouldn't like her anymore.

Her sensei noted this behavior to her, and acknowledged her worries over her friends. She suggested that perhaps she find an outlet for her emotions instead of having her tantrums, and that maybe one day she would be able to release her frustrations healthily. This helped Amaru feel better about her emotions and grew to have a healthy balance between frustration and happiness.

Over time, she allowed her friends to know about her brutish side, and even demonstrated it when she was annoyed by other's behavior (such as older shinobi picking on younger ones, etc.). Deep down, Amaru will always be kind and generous, even when she becomes irritated; her actions are always in thought of others. By Part II, she's displayed an unforgiving attitude to those who harm comrades and family, showing that she perhaps learned this behavior from her sensei.

Amaru always had feelings towards Ōkami. She admired his strength after his family's death, and the perseverance to get his cousin to safety. During her time spent in the Anbu, she visited him when she had time off, and became very distraught at being unable to see him while he was in the hospital recovering. The two grew closer and at some point began to date, and later on they are married in The Last.

By the epilogue, Amaru is a mother and shown to be very loving towards her family. She also returns to being a working shinobi.

Amaru has light turquoise hair, soft black eyes and pale skin, with a purple diamond accenting her right cheek. Her bangs are often covering her forehead, usually to keep any hot fragments from crafting off of her face. Her brother however, encourages her to change her hairstyle in favor of one that shows off her face more.

Her usual attire consists of an Anbu uniform; grey flak jacket, dark pants and a tight sleeveless shirt, with her anbu tattoo being on her right shoulder. Her mask is similar to a dog; sharing resemblance to Anubis. On her days off her casual attire consists of a dark grey crop top covered with a plum colored angled dress. Beneath she wears dark tights similar to Rin's and flats.

In The Last, Amaru switches to a knitted sleeveless cowl-neck dress, with light blue heeled sandals and white capris and at times she is wearing a shawl. In the summer, she opts out of wearing capris. When working, she still wears the typical Anbu uniform.

Several years later, after becoming a mother, Amaru's hair has grown to shoulder length and is usually pulled into a small ponytail, although she lets her bangs fall to the side of her face. Her figure becomes more feminine and when on-duty, wears a modified version of the jōnin uniform.

When Amaru is working at home, her style changes quite a bit. She wears a heavy leather apron, heavy arm-length leather gloves, and a welding mask to keep debris out of her eyes. Her tools are kept on a belt attached to her apron. Amaru's hair is also pulled back into a small ponytail to keep her hair from her face.

Amaru always showed potential, both in her career and shinobi skills. She improved considerably fast and worked hard to prove herself, and learned a lot about herself from her sensei and used that to hone her abilities further. After her Chūnin Exams, Amaru showcased a innate talent with her strength and she was eventually selected to join the Anbu as a representative of the Mizushimas. During the Fourth Shinobi World War, her abilities proved to be vital in the Third Division as she is highly skilled in both taijutsu and bukijutsu, as well as basic weapon knowledge; allowing her to decipher weak points in the weapons used by the Seven Ninja Swordsmen of the Mist, given time.

Being a skilled blacksmith and shinobi, Amaru has great control over her chakra and is a focal point in her style of smithing and fighting. Like Sakura, she has impeccable timing when it comes to gathering and releasing chakra where needed, but most of her physical strength need not be aided in such means.

From a first glance, one would not suspect Amaru of being a high-caliber taijutsu user, nor would they suspect that she has high physical strength. Her calm and caring disposition usually elude to her being weak and frail, but most are often surprised seeing her pick grown shinobi up and even throwing them several meters away. Most of her strength initially came from her work as a blacksmith, but with training from Inko, her physical abilities and taijutsu increased tremendously over the years.

By Part II, her ability to easily destroy things is from a fine balance of her natural strength and chakra control. Sometimes, a firm grasp, if needed, can shatter bones. Kicks, punches and the like can break bones and even cause ruptures and internal hemorrhaging. 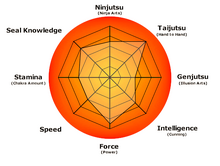 During her youth, Amaru has demonstrated proficient use in Water Release: Immense Cooling and, later on, Fire Release:

Forge Heat. They take a knowing mind to use them to their fullest ability and Amaru seemed quite talented in this area.

With Pain's invasion, and chaos building throughout the village, her along with many other Anbu and shinobi were sent to defend the village. She was one of the many victims of Pain's Shinra Tensei. Later on, she is revived when Nagato gives his life in exchange for giving back the lives of the victims. When the village gathers to cheer for Naruto, she stands away from the crowd, quietly wondering why her view of him had stayed so negative for so long. This would lead her to change her perception of Naruto over the years.

As war quickly approaches the Great Nations, the allied shinobi forces gather in Sunagakure. Amaru is placed in the Third Division, led by Kakashi Hatake. Upon spotting the signal flare for the Surprise Attack Division, they were put up against the reincarnated Haku, Zabuza, Pakura and Gari. As the enemy is engaged and lives are lost, the previous generation of the Seven Ninja Swordsmen are resurrected. However Amaru keeps in her manji formation to protect her sensor and attacks as necessary. As they clashed through the night, Amaru began losing stamina, praying to make it until the morning. Morale was then boosted when Naruto arrived. Eventually, she lands on the battle field to defend against Madara Uchiha, Obito Uchiha and the Ten-Tails.

Winding down to the climax of the war, Amaru was caught in the Infinite Tsukuyomi and ultimately tethered to the Shinju 's lifeforce as with the rest of the shinobi world. While trapped, she dreamed of a world married to Ōkami, wherein he was healthy.

During the events after the war and before Kakashi Hiden, Amaru and Ōkami attend several funerals for those lost during the war. Amaru is later appointed ANBU captain of a team that works closely with Kakashi as the 6th Hokage.

The Last: Naruto the Movie

At some point after the war, Amaru and Ōkami wed, and began living together.

Amaru is as close with Ruri when she can be, and even starts teaching their daughter how to smith, in contrast to Ōkami teaching her some of the Akiyama clan's techniques. She alongside her daughter and Kasumi and her family, is seen visiting Ōkami after his heart transplant. 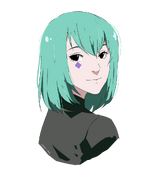 (c) Lumaki-san @dA
Add a photo to this gallery

Retrieved from "https://narutooriginals.fandom.com/wiki/Amaru_Mizushima?oldid=97493"
Community content is available under CC-BY-SA unless otherwise noted.